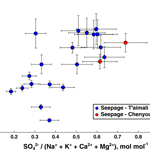 Oxidation of sulfides and rapid weathering in recent landslides

Abstract. Linking together the processes of rapid physical erosion and the resultant chemical dissolution of rock is a crucial step in building an overall deterministic understanding of weathering in mountain belts. Landslides, which are the most volumetrically important geomorphic process at these high rates of erosion, can generate extremely high rates of very localised weathering. To elucidate how this process works we have taken advantage of uniquely intense landsliding, resulting from Typhoon Morakot, in the T'aimali River and surrounds in southern Taiwan. Combining detailed analysis of landslide seepage chemistry with estimates of catchment-by-catchment landslide volumes, we demonstrate that in this setting the primary role of landslides is to introduce fresh, highly labile mineral phases into the surface weathering environment. There, rapid weathering is driven by the oxidation of pyrite and the resultant sulfuric-acid-driven dissolution of primarily carbonate rock. The total dissolved load correlates well with dissolved sulfate – the chief product of this style of weathering – in both landslides and streams draining the area (R2 =  0.841 and 0.929 respectively; p < 0.001 in both cases), with solute chemistry in seepage from landslides and catchments affected by significant landsliding governed by the same weathering reactions. The predominance of coupled carbonate–sulfuric-acid-driven weathering is the key difference between these sites and previously studied landslides in New Zealand (Emberson et al., 2016), but in both settings increasing volumes of landslides drive greater overall solute concentrations in streams.

Bedrock landslides, by excavating deep below saprolite–rock interfaces, create conditions for weathering in which all mineral phases in a lithology are initially unweathered within landslide deposits. As a result, the most labile phases dominate the weathering immediately after mobilisation and during a transient period of depletion. This mode of dissolution can strongly alter the overall output of solutes from catchments and their contribution to global chemical cycles if landslide-derived material is retained in catchments for extended periods after mass wasting.